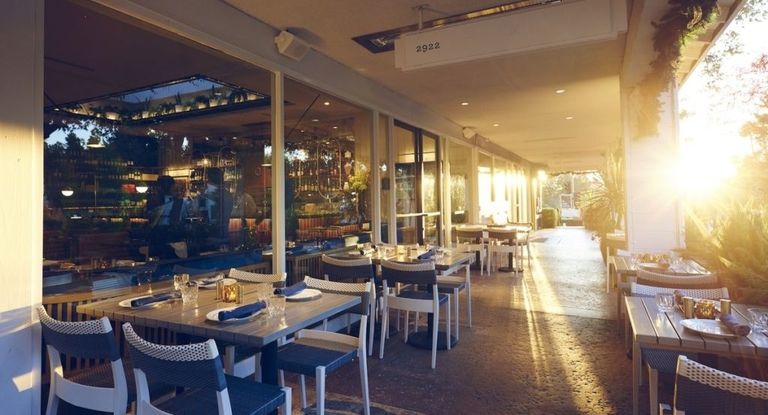 The new Jolie opens today at the Glen Centre

The Glen Centre is tucked way up in the curves above Beverly Hills, a micro-economy all its own with room for a few restaurants, a post office, and a Starbucks. As of today, it’s also home to Jolie, a rather glamorous new French bistro modeled on the plush decadence and fine foods of the French Riviera circa the 1960s.

Inside, the restaurant is awash in marble and dark blue tones. A large skylight keeps the place airy during the day, while dim bulbs and brassy details make the room much moodier in the evenings. There’s a full cocktail bar and broad complement of French wines to match the food, which focuses on seafood, salads, charcuterie, and other light-ish fare.
Jolie’s French-Mediterranean menu is the work of chef Cody Dickey, who was previously running the show at Carbon Beach Club in and was also in the kitchen at Gato in New York City. The operators and overseers are New School, the consulting and management team known for a variety of projects all around the city, and for their partnerships with Roy Choi over the years, while the outright owner is Thomas Plejer of Jayde Market, also located at the Glen Centre. Studio Unltd (Bestia, Otium) put together .

Jolie officially opens for business today, keeping hours from 11 a.m. to 4 p.m. for lunch, and 5 p.m. to 10 p.m. for dinner. Make reservations on OpenTable.