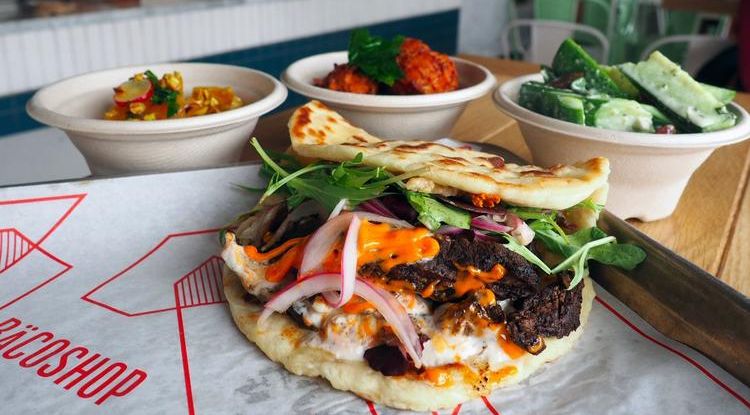 Coffee-rubbed steak with charred scallion crema; braised pork cooked with berbere Doro Wat-style; and buttermilk cucumbers with pickled grapes. This is how chef Josef Centeno does fast-casual dining.If you’re familiar with Centeno and his five downtown L.A. restaurants — Orsa & Winston, Ledlow, PYT, Bar Ama and his first, Bäco Mercat — it may seem odd to see the chef outside of downtown. But on Thursday, he’ll open his sixth restaurant, a fast-casual spin-off of Bäco Mercat called Bäcoshop — on the corner of Washington Boulevard and Irving Place in downtown Culver City.

While Bäco Mercat is now recognized as one of the best restaurants in the city, Centeno says his original intent was to make it a Bäcoshop, much like his latest restaurant, and centered on those namesake bäcos, sandwiches made with Centeno’s signature flatbread.

“The plan was always to get to this and do kind of a Bäco to Go; we were just trying to figure it all out,” said Centeno. “This is us figuring it out.”