When Trader Vic’s in downtown Los Angeles opens to the public May 2, it won’t have the same intimate, clubby feel as the Vic’s at the Beverly Hills Hilton once had, but it will have the requisite moai, island-themed decor and the roster of fruity drinks. Big and bright with a wide-open bar that looks onto Olympic Boulevard, this new incarnation of Trader Vic’s reflects the chain’s storied past but aims to broaden its appeal to lure tourists and convention-goers. In that sense, Trader Vic’s has stayed true to its tiki roots even as it celebrates its 75th birthday.

American tiki is to Polynesian culture what a Norman Rockwell painting is to a typical family dinner. Expect cultural authenticity, and you’ll be disappointed. That doesn’t mean you shouldn’t enjoy the hybrid exoticism of tiki, steeped as it is in mid-century America and romanticized visions of island life. Like French fries or pizza, tiki is a uniquely American invention.

Last Friday, a few dozen FOVs (Friends of Vic’s) gathered as “ohana and family” to celebrate and bless the new location. “Tiki Modern” author Sven Kirsten, who consulted on the restaurant’s decor, was on hand as the Rev. Neal “The Big Kahuna” McHenry led a ritual to consecrate the venue, sprinkling red salt from Hawaii dissolved into Pacific Ocean water on the doors and entryways.

Photos: Rob Takata / For The Times 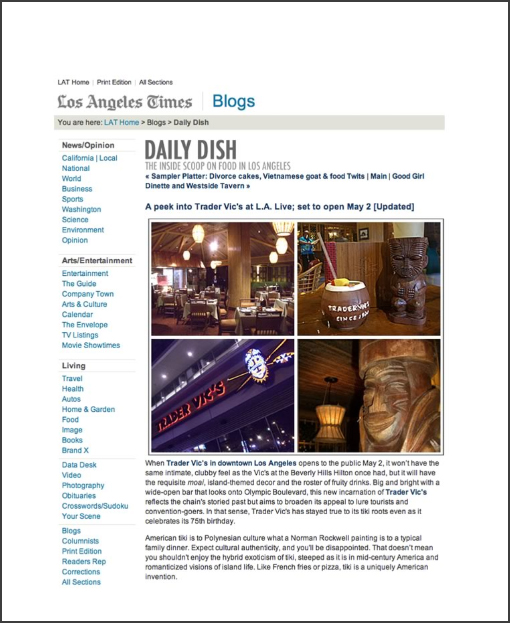