With a vibrant, new Pasadena outpost by architect Barbara Bestor, the struggling juice chain wants to make a splash.

Along the main drag in Pasadena’s historic downtown core, Jamba Juice has opened its newest store. When you step inside, the expansive space—with its terrazzo floor, sinuous oak bar, minimalist European furniture, and seafoam-green walls adorned with relief sculptures of fruit—looks more like a chic restaurant than its sterile brethren populating strip malls and food courts across the country. Designed by the prominent L.A. firm Bestor Architecture, the Innovation Bar, as it’s known, represents Jamba Juice’s first-ever concept store and a foray into design experimentation as a way to lure customers.“All retail companies, especially brands that are 20 to 25 years old, have to find ways to stay relevant and keep from getting tired,” says David Pace, Jamba Juice’s CEO. “It’s how do we go out there, try some things, experiment, and look at the business, design, and products differently. This was put into place to test current assumptions.” 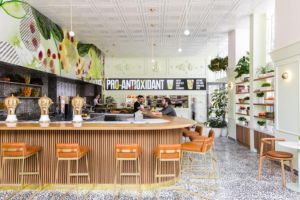 The past few years have been rocky for the smoothie brand, which has beenshedding unprofitable stores and has switched to a franchise model to cut costs tostay financially healthy. Amid those changes has been an interest to stoke more consumer interest in the brand. After consulting with 2×4, a New York–based design studio, Jamba decided to build out a concept store.

“They wanted it to feel more like a part of the community rather than a mass experience that gets rolled out,” says Georgianna Stout, a partner and creative director at 2×4. “What we’ve been seeing in all retail experiences—not just in food—is that it’s such a competitive market now. If you think of Amazon, you can get anything in a day, from hardware to diapers to food. In general, people who are competitively part of those same markets are needing to rethink their retail spaces to differentiate them. How do you appeal to someone who’s used to a mass experience? How do you get customers to come in and stay? We worked to think about the social experience in a store and to make the environment more appealing and comfortable.” 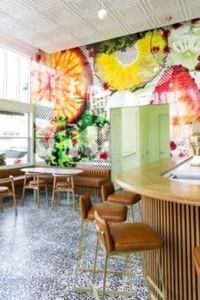 Stout and Jamba Juice admired Barbara Bestor’s ability to create environments that feel vibrant and fresh, but not in an artificial way—her most recognized work includes Intelligensia Coffee and the splashy headquarters of Beats by Dre. So they didn’t give her a specific rubric for the space so much as a general sensibility. “If you walk in the door and say, ‘Wow, I can’t believe it’s a Jamba Juice,’ that was almost the brief,” Stout says.

To Bestor, the challenge lay mixing local influences and the brand’s core identity to create something that spoke to the notion of freshness, an important attribute considering that the store’s main products are cold-pressed juice (not the sugar-laden smoothies for which Jamba has become known) and healthy meals.

“In the coffee world, there’s a focus on using design as an expression of authenticity, caring for the customer, and adding some delight for them,” Bestor says, noting that while ultra-fancy third-wave coffee shops have become the norm in many cities, juice is following suit. “As architects, it’s exciting to look at an established brand and be able to try out ideas to explore ‘connoisseurship’ of its product.” 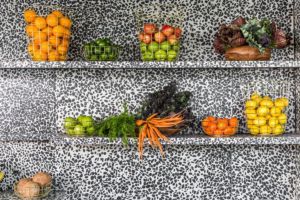 When Bestor began looking at the brand’s current identity, she saw some similarities to the super-saturated oranges, magentas, and teals that L.A. designer Deborah Sussman used in the 1980s. “If you look at how Jamba shows themselves with color—which is embracing it—what would be a way to tune color to a newer palette? What says ‘natural, fresh fruit’ today?” To that end, she kept the palette vivid, but more organic: light greens, natural woods for the bar and furniture, and a floor made from river pebbles embedded in concrete.

The space is located on a historic street with a landmarked facade, and while there were no laws dictating what Bestor had to do inside—the exterior had to stay the same—she tried to pull some of the exterior influences indoors. The building was originally built as a drugstore in the 1940s, so she decided to incorporate a traditional tin ceiling and used deep moldings to adorn the walls.

The real showstoppers in the space are supergraphics of fresh fruit—which were designed by Bestor Architecture—that cover some of the walls and also cycle through digital screens. “It was about scale and making really big, visceral impressions,” Bestor says. “It gets across the idea of naturalness and freshness but in a contemporary way.” 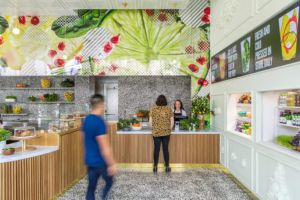 When customers come in, they can order food from iPads in the front of the store, pick things from a grab-and-go shelf, or order from the cashier. One of the biggest differences in the customer experience is being able to sit in the store. To get people to linger, Bestor looked to the design of Viennese cafes from the 19th century. There are a handful of tables, bar stools, and a banquette upholstered in leather that offer places to sit. There’s also Wi-Fi in the space.

On the menu, Jamba Juice is experimenting with different types of cold-pressed juice at a higher price than it typically sells its products (about $8 a bottle) and healthy complements, like quinoa salads. While the store is a one-off and Jamba doesn’t have any plans to create more like it at the moment, it’s using the space to test the idea of opening regionally inspired retail spaces, much like Starbucks did with its Reserve line. And some elements that do well in the Pasadena location, like menu items, could be rolled out nationally.

“When your designed space reinforces that you’re about customization and not ‘one size fits all,’ customers can say it’s kind of my local shop, it’s different,” Pace says. “But if you stamp out a New York City shop just like one in Albuquerque and there’s no customization, there’s where people start to feel worried. Customers want to see convenience, personalization, and new taste profiles. . . . In this business, you always have to reinvent yourself.”

Correction: The fruit supergraphic murals were designed by Bestor Architecture, not 2×4 as a previous edition stated. 2×4 designed the digital signage for the store.