Times are certainly changing at Universal CityWalk, albeit one restaurant space at a time. Slowly but surely, some of the touristy strip’s biggest, chain-iest sections are being replaced by quality concepts from small operators, including pedigreed chefs like Ludo Lefebvre. Next up: Dongpo Kitchen, a casual eatery from the Meizhou Dongpo team.

The beautiful new CallisonRTKL-designed restaurant sits in the heart of CityWalk, across from the Starbucks with plenty of frontage. That means there’s room for patio seating out front, plus a beautiful circular dining room inside that includes a water feature as the centerpiece. You can also see the entire kitchen in action along the back wall, while a variety of marble two and four-tops span the rest of the room.

Off to the right is a small annex that leads to the patio area, and will at first simply serve as overflow dining for the 100-plus seat restaurant. Eventually guests can expect a beer and wine bar to the back of that wing, which will liven up the space even more than the colorful lights and high foot traffic outside. 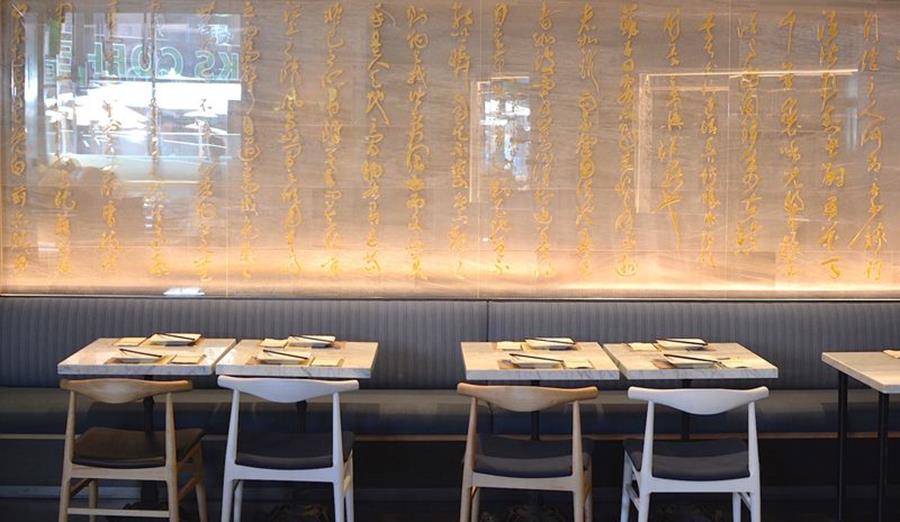 As for the menu, expect a scaled down version of the Chinese food favorites the Meizhou Dongpo team is known for, whether that be roast duck bao (called sliders here), dumplings, noodles, soups, or meaty main dishes. Most items are priced rather competitively — even for CityWalk — though there are a few splurges like a $40 half roast duck, which the company tends to specialize in. The full menu is below.

The new Dongpo Kitchen marks a stark contrast to the company’s existing American portfolio, which until now has mostly been about big, beautiful Chinese food meccas. The first Meizhou Dongpo opened in Century City back in 2013, while most recently Dongpo in Arcadia brought a bit of moody flair to the brand.

Dongpo Kitchen opens to the public this coming Monday, keeping lunch through dinner hours from 11 a.m. to 10:30 p.m. most nights. On Friday and Saturday, those hours stretch to 11 p.m.