IN THE WURST WAY: DOWNTOWN’S WURSTKUCHE SERVES UP BOHEMIA ON A TOASTED ROLL 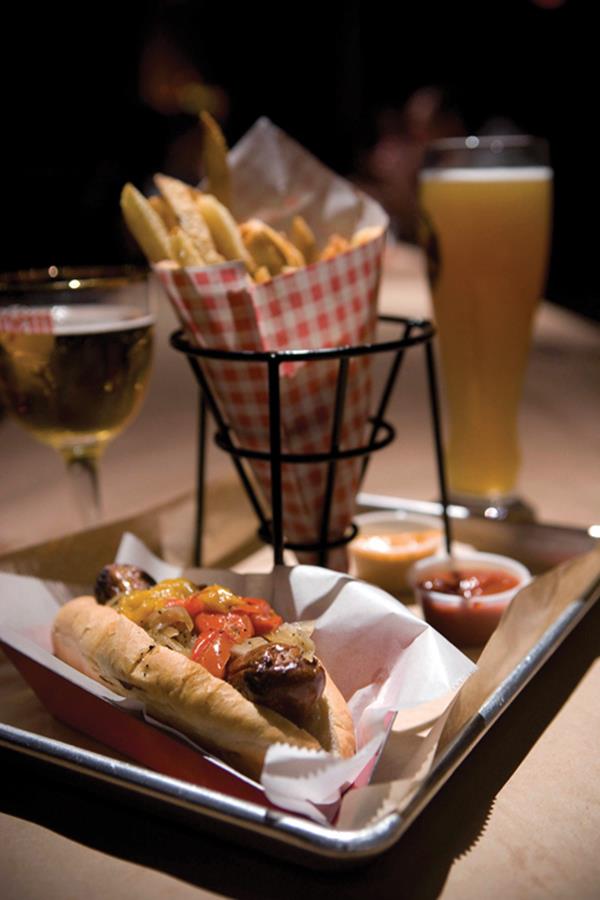 Sausage exotica: A link of buffalo, beef, pork and chipotle peppers topped with more peppers and served with fries and plenty of beer. – Anne Fishbein

There may be no more universal pleasure in the world of meat than a well-made sausage plucked straight from the fire, filmed with a bubbling mantle of grease, and thrust at you when it is still so hot that you bobble it back and forth between your hands because you are afraid of scorching your fingers. If it has been cooked properly, the skin — natural casing, of course — crackles under your teeth before it gives way with a distinct, almost audible pop, and your mouth is flooded with torrents of burning juice, garlicky and rich, with a touch of hot spice and the sweet, carnal essence of flesh. Such a sausage demands beer. And then another sausage. And then another beer. Repeat until full.

Los Angeles, of course, teems with great sausages, from the kosher merguez that rules Fairfax to the sour pork sausage at many Thai restaurants, the fennel-lashed links at Pizzeria Mozza to the lemony little makanek at Marouch, and the spherical Oaxacan sausages in Pico-Union to the earthy Spanish morcilla at La Española in Harbor City. If you want to explore the differences between the chorizo styles of Guatemala, El Salvador and Chile, Los Angeles is the place to do it. I miss the spleen sausage called hasip, which used to be a specialty of the old restaurant Uzbekistan, but the last time I had the andouillettes, cow-intestine sausages, at Mimosa, they were as bouncy and reeky as any “AAAAA” andouillettes in Lyons.

Right now, though, the locus of sausage consumption in Los Angeles is Wurstküche, the umlaut-laden restaurant across from what generations of L.A. punks still think of as Al’s Bar. It’s a stripped-brick beerhall serving nothing but sausages and fries, perfumed with smoke and sputtering meat, equipped with vats of honey mustard and enough beer taps to please the most hardened hophead. The impeccably designed interior splits the difference between high design and building site, so that the impossible geometries of the folded-metal sausage plates — which resemble a detail from an early John Okulick construction — rhyme with the folded metal barstools, and the worn wood of the beams matches the less-worn wood of the long communal benches. The prime architectural flaw, the long narrow hall that must be traversed to reach the main dining room from the counter where the orders are taken, becomes one of the most popular areas at night, where you can lean against the wall, sip Trappist ale, and greet everybody who walks by for the 10 minutes it will take for your sausage to be cooked.

Just beyond the range of the alternate jurors who lunch, Wurstküche occupies the kind of way-downtown location everybody loves, a short walk from SCI-Arc but leagues away from Bunker Hill bankers; a few steps from the center of the Arts District but hidden from casual passersby, especially if they are looking for the actual street address, which corresponds with an unmarked exit from the bar. (The actual entrance is around the corner on Traction.) The restaurant is arty but clean; gritty but stocked with white truffle oil, aïoli for the fries, and Triple Karmelite on tap — the kind of bohemianism that accepts American Express. Your parents wouldn’t feel out of place if you took them here for a bockwurst and a dunkelweizen after an evening of Wagner.

The fries, in the Belgian manner, are twice-fried, not the best you’ve ever had but better than serviceable, and the blue-cheese-walnut dipping sauce is especially good. In addition to the usual bratwurst and hot Italian, the sausages include exotica like mango-jalapeño-chicken, Cajun-style alligator, and a slightly funky rattlesnake-rabbit sausage that seems more like the punchline to a joke than it does like something actually meant to be eaten. (If friends are passing around a half-dozen different sausages to try here, the rattlesnake-rabbit is invariably the one that will remain half-eaten at the end.) But the “Austin Blues” sausage is formidable, a link of hardwood-smoked pork that has the deep, round flavor of serious barbecued ribs, and the duck-and-bacon sausage has a subtle, pleasing gaminess. The kielbasa snaps. The green-chile-cilantro sausage almost transcends its origins as ground turkey and chicken.

It doesn’t take a total cynic to intuit larger ambitions from the Wurstküche crew, the drive to perfect and streamline a marketable concept into easy reproducibility: high-quality food at popular prices, quick turnover, and an emphasis on unusual beer, mostly German and Belgian. The restaurant brings in its sausages from artisanal butchers instead of making them in-house, which theoretically leads to flexibility, and the toppings are customizable only insofar as you have the choice of sautéed hot peppers, sautéed sweet peppers or sauerkraut to put with the grilled onions on top of your sandwich. The PETA crowd can get vegan bratwursts, kielbasas or Italian links, the sausage-joint equivalent of the Landlubbers’ Platter that used to be on the menu of seafood restaurants, and for the abstemious there is dandelion & burdock, a soft drink reputed to have first been concocted by St. Thomas Aquinas, with the anisey herbal complexity of an obscure monastery liqueur. It aims to be all things to all people, at least all people who don’t mind a sausage or two for dinner, people who think it might be a good idea to down a high-proof Unibroue La Fin Du Monde or two before going back to work.